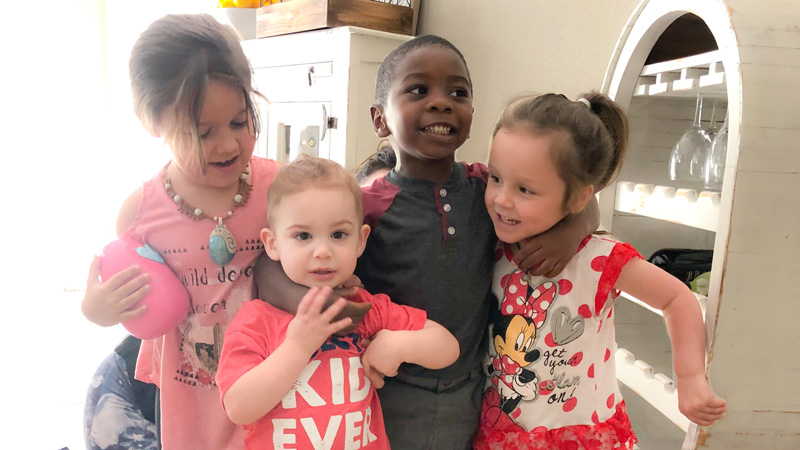 The day Ana and I became trained and licensed foster parents, we naively stepped into a strange dichotomous world. It’s a place where some view a singular event as unfair, cripplingly painful, and wrong, yet it is just and immensely joyful to others. We have been selfless heroes doing a deeply admirable thing for the greater good of all and, yet to others, they were heartless acts at the hands of cold-blooded opportunists.

On January 7/2017, Ana and I went to a place in Las Vegas called Child Haven. The Department of Family Services had emailed us a long list of names with details about children that needed foster homes in the hopes that we would choose one or more and bring them home to care for them.  Ana prayed, then looked at the list, and one little boy stood out to her. She believed that God led her to this little boy and we were supposed to give him a home.

When we arrived the complex was bursting with children of all ages that had “come into care.” In plain English that translates into they had experienced the trauma of being taken from their family after an event so dangerous to them that it would warrant that, then transported to a government holding facility to wait in the hope of placement with a foster family.

Shortly after checking in, a very kind and helpful worker brought us a bundled up little baby boy.  Kwamane had been there for two weeks.  That was two weeks of his young life without his loving mother doing what she had been doing since his birth.  Holding him, cooing, loving, reassuring, feeding and meeting his every need. You can visualize what that would do to a four-month-old child.  He needed her but she couldn’t be there.  We were the only other option and there was no way we were going to leave that place without him.  He was one of the fortunate ones.

He needed to be processed before we took him home, and that included a visit with the nurse. Her station was inside the facility where the children of that age group were staying. It took our breath away. So many little innocent souls there and so few arms and soft voices to go around. Cribs lined the hallways. The staff were doing their best, but it’s a government facility, and to say they were short-staffed and overwhelmed would be grossly understating the reality of what they face on a regular basis.  There simply aren’t enough good foster homes to meet the demand.

Ana was crying when we left. Some were tears of joy as she held Kwamane in her arms knowing we were going to do something good for him and his family. But most were from the pain of knowing we had to leave so many helpless little souls behind.  All we could do was pray.

From that day until six weeks ago, we have spent every day of his life with him.  At first we were not his mom and dad, just people that met his basic needs. Sleep was sporadic; his tears were less so. But Ana never wavered and was with him night and day, holding, consoling, feeding, and caring for his every need. He didn’t want to be alone, he had breathing issues, so she slept in his room.  There were frequent doctor appointments, visits with workers, later on there were therapists and family visitation, and through all of it, Ana was there.

You can’t give that much of yourself to a child, a precious child of God, and not build a bond. It’s what you should expect.  In fact, it’s what you should hope for if you love that child.  Even if that bond is between the child and a caregiver filling in for the biological mother when she can’t be there. Sadly, yet understandably, so many on the other side of the equation don’t see it that way.

Three months into us raising him, she was released from jail, and we met her during a weekly scheduled visit at a family services facility. She observed her baby closely, and us, and our interactions with him and she saw the bond we had built with him. She quietly said that she had prayed that his foster family would be Christians and that we must have truly loved and cared for him because he was so happy and comfortable with us.

She had made some mistakes, but it was clear that she loved her child deeply.

Over the coming months, we built a relationship with her based on respect, and a trust began to develop. Crystal followed her case plan, turned her life around, and in 2019 she legally reunited with Kwamane, and the DFS case was closed. Kwamane continued to live with us, no longer our foster son, but we continued to raise him along with our other children. We had become a family at this point, Crystal included, and in the spring of 2020, Ana and I legally adopted her.

We were helping her get on her feet, knowing full well that one day she would take him and go live on her own. She wanted to raise him and be his mom and we supported that decision.

That day came six weeks ago.

For any transition like this to be successful, especially in his case, the ties between him and us must be cut clearly. For Crystal to become more than a biological mother, she has to be the one that meets his every need. That can’t happen if he is around us as he will always defer to the people he has built that trust with already. For her to have a fair shot at creating that mother/son bond, we have to be out of the picture.

It’s been almost four years that Ana and I have been his caregivers so for Crystal to become more than just a biological mother to him,  he has to suffer a traumatic loss. The loss of what his brain believes is his family, his mom and dad, and his siblings and dogs and his room and his entire life as he knows it.  So the process has been very hard on him at times.  He has good days and bad days and he asks to come home, but he can’t.  Not if Crystal wants any chance at becoming more than a biological mother to him.

And then there are our girls. We adopted them in 2020 as well, and they understand they are here now forever, but Kwamane leaving triggered old trauma for them. Cady cries every day. Emma has grown quiet and cold and angry. Both girls miss their brother because they counted on him being there, and they don’t remember a time without him in their lives. To them, it’s an excruciating loss. And it has re-ignited their mistrust of adults.  Until they came to us adults were the people that lied to them and hurt them and passed them around from home to home.  This experience has erased two years of hard work done by them and us and many therapists trying to build trust in our home and family.  They have regressed and many of the issues they came here with that we had managed to dissolve over time, have returned.  And so we are starting over and helping them to heal and one day we pray they will trust again.

We have talked with Kwamane on FaceTime and the phone, mostly on his worst days, just to let him know we all love him, and we all miss him, and that we are still here. It should help him feel more secure seeing that we didn’t reject him. We pray he understands in time that we just can’t be together right now.  Those are bittersweet calls because we love to see his beautiful face and hear his voice, but we all see him hurting and missing us, especially Crystal, and we miss him and we miss her.  But it has to be this way, at least for now if she is to build the bond she wants with him.

For Ana and me, it’s been hard to breathe. Showers happen when we finally realize we haven’t for a while. Meals get shoveled in because we have to and not for any other reason. We pour all we have into our girls, patching them up and making their days as special as we can.  And we do it with an even deeper appreciation for them than before because of the rawness of knowing each day is numbered and anything can happen.  The finality of loss does that to people.  They are our first priority because we won’t let this or anything else prevent them from getting all they need from us.  Once they are in bed for the night, we take time to process our own feelings and patch each other up.

Thousands of people around the globe on social media have followed Kwamane’s story and the story of our family. We chose to share it publicly to inspire people to become foster parents or help in some way because there is an obscene number of kids waiting, needing, and deserving in every city and town.

This is part of that story and an important part, but it’s taken us this long to find the words to share it.  We apologize, we just needed the time.

I worry this story may frighten people from becoming foster parents and so I hesitate sharing it. But imagine loving a child so much that missing him can be this crippling.  Then imagine how that love has undoubtedly shaped who he is and ultimately what and who he will become. Imagine the story he will tell in years to come and imagine the lives he will change for the better when he does.

Then imagine what it would have become had no one taken him home to love him. Imagine if no one wanted to feel this way, so they chose not to get involved.

Imagine him knowing he didn’t matter.

If you are unsure of your purpose in life, consider becoming a foster parent.  You will soon discover that purpose.  No amount of money or power compares to what you can achieve in a child’s life with unconditional love, commitment, and loyalty, the joy that will bring, and the legacy you will leave behind.

The pain we feel today was worth it because Kwamane is worth it.  I would give my life for him.

God is with us all, and because of that, this story isn’t over…

Ana and I did a podcast to share more of the story.

Kevin Myles And Fitness Over Fifty