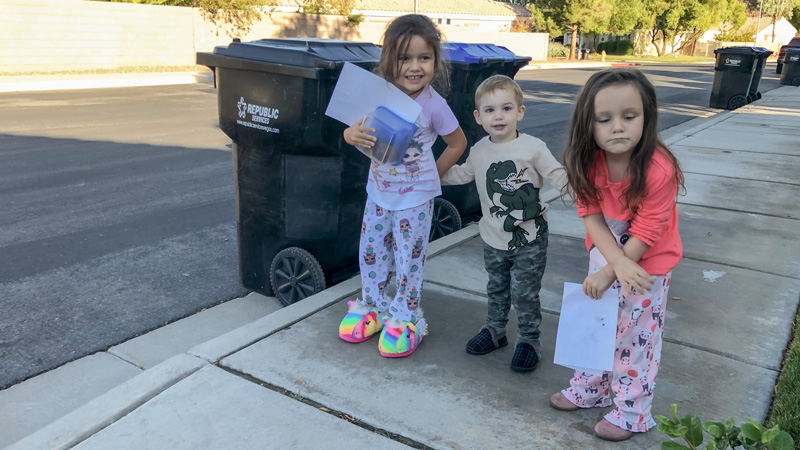 We hear his big truck first. The low rumble of his heavy-duty engine as the truck methodically works its way down the block. Then you hear the hydraulic whine of the mechanical arm as it lifts the garbage bins high in the air, then flips them over and dumps their smelly contents into the back of his truck. It’s one heck of a thing to see in a pair of unicorn or plaid slippers or even a pair of pink cowboy boots.

The Garbageman comes early, around breakfast time each Tuesday, and it’s the sworn duty of whoever hears him first to alert the family by screaming “GARBAGEMAN” as loud as possible. That battle cry sets the whole family to action, and it’s a race to the front door.

The wave of pandemonium dressed in whatever we have on at the time pours outside as dogs and kids and hovering parents make a bee-line for the sidewalk. The shortest ones, craning their necks to see him coming, start screaming “THERE HE IS” between leaps and frantic waving as the overgrown waste-eating beast rolls up to our house, air horn a-blowing and a big smile on the Garbageman’s face.

This week, our kids decided they would like to make him a surprise. So Monday afternoon, they each sat down and carefully drew and colored pictures for him. Cole is new to arts and crafts and prefers to draw all over himself most days, so Cady oversaw his project to ensure it would make the grade. Mommy contributed by helping Emma and Cady bake a batch of fresh brownies. The next morning everything was packaged and ready, and the excitement was even more palpable than most Tuesdays.

When he pulled up to our curb, they ran up to his truck, screaming that they had surprises for him. He opened his big door and stepped down to the street, and they presented him with their treasure. The look of surprise and gratitude on his face was as precious as the looks of pride on theirs. He took his time and was gentle and sweet with them as he carefully inspected each art piece and expressed his thanks. Ana and I stood back and watched, beaming with joy, warmth, and pride.

He made their day, and I suspect they made his.

You might have your Batman, your Superman, Ironman, or even your Wonderwoman, but we have our Garbageman. And he is real, and there, and he makes our kids feel important every Tuesday morning. They wake up excited to see him, and he never lets them down. And the kind and selfless heart he has for these little souls that idolize him and his big truck make him a bigger superhero than all the others.

It only takes a selfless minute to make someone’s day, and it will be a day they will never forget.

The Story Behind The Pictures